Janelle Cordero is a local artist, educator and writer.

Janelle Cordero is an interdisciplinary artist and educator living in the seventh most hipster city in the U.S. Both her writing and her paintings are sparse narratives that emphasize the disconnected nature of the human condition. Her writing has been published in dozens of literary journals, including Harpur Palate and The Louisville Review, while her paintings have been featured in venues throughout the Pacific Northwest. Janelle's work has also been featured in multiple local shows, including Terrain and FemFest.

Janelle's most recent poetry and art collection, Woke to Birds, was published in October of 2019 through Vegetarian Alcoholic Press. Her debut poetry collection, Two Cups of Tomatoes, was published in 2015, and her chapbook with Black Sand Press was published in April 2018. Janelle published an additional chapbook of poems and paintings with Bottle Cap Press in 2019. Janelle’s artistic priority is to collaborate with other creators to push for social and political change.

Greetings! We welcome on the couch our eighth artist interview with Janelle Cordero! We first saw Cordero's work at Terrain 9 and we just had to get to know this amazing artist and poet!

Interview with The Broke Bohemian 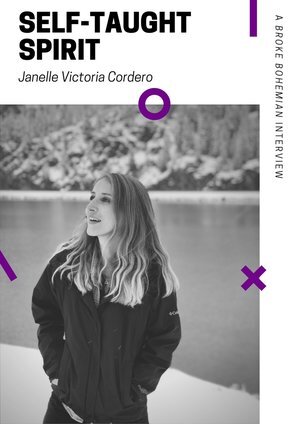